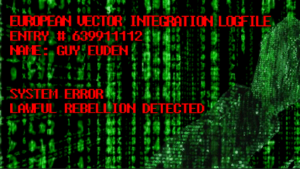 In this Episode of “Living outside the Matrix” Nigel talks with Guy Euden to discuss the freeman movement. During the peak of the movement here in the UK back around 2010, Guy achieved a high level of knowledge about the various tools available to us for achieving financial freedom from the system. In this interview he shares his knowledge and experience as well as his perspective on the concept of freedom.

What is the Freeman movement?

It was from around 2008 to 2012 here in England when many people were becoming interested in the possibility of claiming their sovereignty from government and the financial system. These two factions appeared to be intimately interwoven, yet experience has shown them to be separate. There are many tools available that can be used to achieve your financial sovereignty in the commercial world. However, the level of study and commitment required to gain the required level of understanding and competence is high.

Eleven years ago now, Robert Menard and Mary Elizabeth Croft were early pioneers of these ideas in Canada. The thinking quickly became popular over here in England. There was a wave of optimism that men could achieve genuine political freedom and sovereignty,  and make the state work for them. The mechanisms of deception were uncovered and Rob Menard discusses them in his (now somewhat dated) film ‘the magnificent deception’ . Many people picked up the ball and ran with it, but ultimately political freedom could not be achieved by this means.

The most useful knowledge gleaned was probably that to do with Trusts and their usefulness in concealing ownership of assets. Ultimately it all amounts to hiding your silver from the thief that is government. I hope soon one day men will be free to hold assets without having a slice of their cake taken from them by force.

We are free by right

It is right that we should own our own lives and that therefore we should be free to keep the product of our efforts. It is right that men be able to act on their own judgment without forceful interference from other men.

However we are not politically free. Not yet are we free from interference of other men in the form of government. We are not yet able to live without being governed. We are not free to opt out and govern ourselves. But I believe we will be one day.

There is a way to freedom. There is action we can all take. The freeman movement served as a useful catalyst to begin a process of discovering personal identity for many people. It has great value is understanding your power within the commercial system. It has served as an important personal growth vehicle for a great many people – myself included.