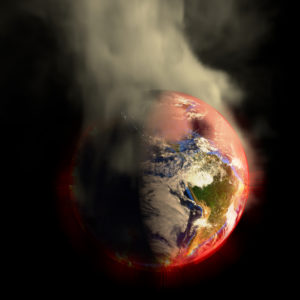 These are climate change facts that are provable by looking at the undisputed historic record of temperatures and atmospheric CO2.

1. It has been much warmer in the past than it is today.

2. There have been far higher levels of CO2 in the atmosphere in the past than we have today.

3. CO2 is plant food. The more in the atmosphere the more abundantly plants grow.

3. The planet is demonstrably getting greener as plants flourish due to the increased atmospheric concentration of CO2.

You only need to know these four facts to disregard the official mainstream story of imminent climate disaster as untrue.. This narrative calls for massive reductions in energy use that would be catastrophic for humanity taking us back to the economic dark ages.  But here are a couple more facts.

4. We are at a historic low point of atmospheric CO2.

5. According to Dr Patrick Moore if levels of atmospheric CO2 fall beneath 150 parts per million plants will die, and therefore so will the planet.

I challenge you to verify these climate change facts and then try to reconcile them with the mainstream nonsense. If humanity is ever to make any kind of progress towards peace freedom and abundance we simply must break through the lies of the mainstream narrative. There is so much that is just not true.

The environmentalism that underpins the mainstream narrative holds an untouched planet (the pristine planet premise as Alex Epstein calls it) as the standard of value. Humans do not figure in the equation. There is no consideration of how humans may best flourish, only that human impact must be minimised. This is anti-human. I urge anyone reading this to investigate the issue thoroughly and look at all the cliamte change facts before making a judgment.

The mainstream narrative supports unnecessary population reduction, energy use reduction and unsurprisingly a long list of environmental taxation. For example the existing low emissions zone in London, UK.  The truth is 180 degrees in the other direction. The climate change facts tell us that the world would be a far greener and more abundant place if atmospheric levels of CO2 were much higher. There are limiting mechanisms with the effects of increasing CO2 levels that show the runaway warming scenario as nonsense. See climate change facts 1 and 2 above and check them out for yourself.